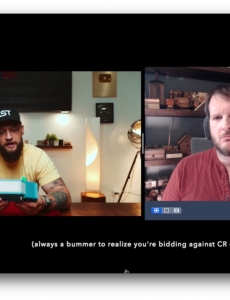 I was watching a reaction vid of a guitar teacher seeing/hearing Ween for the first time and it occurred to me that this relatively recent rash of reaction recording really haven’t made it into the puzzling world (afaik). This could perhaps be because reaction vids are rather silly but I had fun watching it and thought I’d give it a try.

Keep in mind that this video will SPOIL the puzzle (starting a couple minutes in) – it is a solution vid, so once I’ve introduced the vid and the CR introduces his, he moves on to the solve (at 3:30).

Chris Ramsay (yt puzzle solver with a few million subscribers) is the obvious subject of such a video – the vid is not made in bad faith and is really just meant to be fun. CR has helped bring a lot of new puzzlers into the puzzling world – at the same time, there are a number of puzzlers that are not the biggest fans as it isn’t uncommon to see puzzles treated rather harshly (see his Sea Chest vid…) or for credit to not be given to makers/designers. As a public figure of this size (and as I do not know him personally as I do many other puzzle vloggers), it seems that it would be fair game and I thought there might be some puzzlers out there who might enjoy it. (I will also admit to some reasonable envy over someone managing to seemingly make a solid living solving puzzles – nice to see except when he happens to be bidding against me at auction).

I am reviewing his Slammed Car solution vid – obviously it is rife with spoilers. I chose the vid as it is recent and is a puzzle I own; it also happens to be the first review I wrote and it is nice to come full circle.

The tech I used is far from perfect – this is kind of a proof concept: if folks enjoy it, I can beef up the methods used to create it and spend a bit more time on production value, etc. While I am not really a vlogger (do people still use that word?), I did get my BS degree in film production (we actually worked with physical 16mm film, which may give you an idea of my age).

Please note that US copyright law has explicitly been found to protect reaction vids under the fair use exception (a bit of googling will confirm this, although I also went to law school and worked in the copyright section of the IP Clinic). 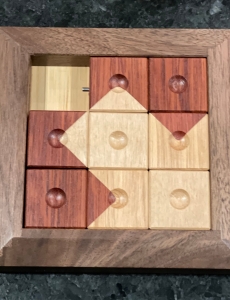 Don’t be fooled: not all sliders are created equal, and some keep their biggest secrets hidden within.

If you like sliders, you need to get Arrow. If you like surprisingly challenging, well-made wood puzzles with multiple challenges, a beautiful aesthetic, and excellent tactile feedback, you probably already got Arrow.

And yet, somehow, at the time of this writing there remain about 50 copies of this limited release puzzle available from Pluredro. As with most of Juno’s best works, I am confident these will not be there much longer. I thought perhaps I might try and explain what makes this design so interesting and fun, particularly for those who may be unsure or on the fence.

Most anyone who ate fast food as a child in the 80s has done a sliding tray puzzle at some point – flipping tiles around a small plastic tray to create the image of Hamburglar or Grimace while eating terrible food is certainly in my past. Classic sliding tray puzzles can be pretty basic, especially the classic 9 square design, where you use the one open voxel to move the tiles around to create a picture or move a square from one side to the other or whatever.

But that is most definitely not this……. not at all. Yes, this has nine squares with one open voxel (the puzzle comes with a lovely placeholder), and yes the tiles must be moved around to complete the 9 challenges (mostly depending on where the empty voxel is at the start). But hidden within these tiles is a confusingly simple pattern of pins and grooves that prevents certain squares from moving in certain ways, making this a totally different animal from the simple trays from which it evolved. Each square has grooves along 1.5 sides and a pin on another; the frame itself has grooves on two sides. Very quickly, you learn that not every open voxel can be crossed by every tile, depending on which tiles surround it, and that you will need to find lengthy detours to get around the frequent barriers created when a pin runs out of groove (and with Stella nowhere to be found, you are left to your own puzzling devices to get back said grooves).

Sliders can certainly be great fidget fun – solutions can oftentimes require dozens and dozens of moves to reach; considering the fact that you will almost definitely not manage to only do correct moves with a difficult slider like Arrow, the actual move count can easily be in the hundreds. So stick an old episode of Buffy up on the tv because shirt just got serious.

And this is a big part of the fun – after hours of clicking and clacking this way and that, I started to get an unconscious sense of what could go where: at first, I tried to consciously remember such limitations: e.g. “ok, pieces with a pin on the right won’t be able to travel along the left side of this piece, whereas pieces with a pin on the left can’t travel along the right side of this one…..” This quickly became too cumbersome for my averagely-smarter-than-average mind, and I found myself bumping up against a much more wonderful place of puzzling zen, where I didn’t need to think consciously to sometimes know what could or couldn’t go where.

Sliders are weird because the typical slider could be easily reproduced and solved on paper – you don’t need perfect dimensions or tolerances, just moving stuff around. This is perhaps why most sliders tend to be pretty affordable (including some really great designs: Diniar Namdarian has some excellent, original puzzles in plastic that are generally less than $20). Putting aside the fact that the pins and grooves of Arrow mean that this would be difficult to do with this puzzle, there is another reason why you would prefer wood: the tactile and auditory feedback is seriously meditative. When you get into the groove (pun intended), you can start flitting and flying around, clicking and clacking your way through and around and back again (zenning out while the Scoobies save us from yet another apocalyptic close-call).

Arrow takes an interesting aesthetic approach to its solution, requiring you to make a single light arrow out of the single dark arrow that the puzzle first displays. This requires a total rearranging of the pieces – it is really quite cool how the design has been accomplished, with the negative space around the arrow image slowly becoming the new one. While not strictly necessary to the puzzle itself, it adds an Escher-ish element to the puzzle that only makes it that much cooler to solve.

Another lovely detail is the lovely step-joinery at the corners of the frame; something Juno tells us was not necessary but just shows the level of quality you get from his work (in case you were not already aware).

The need to go back to go forward is a common occurrence in sliding tray puzzles, but Arrow takes this to another level: like other restricted sliders such as Slide-Blocked Sliding Block by Bill Cutler, Arrow will seemingly bring you close to success only to cruelly and amusingly rip it from your grasp when you realize that you are actually nowhere near done. After several hours working on the puzzle, I found that I had successfully managed to build the new image required; my only remaining issue was that the empty voxel was on the upper left instead of the upper right. Surely a minor issue that could be remedied with little trouble…….. nope. No. NoNoNoNo. Not at all. Until, finally, a few hours later and that pesky empty space had been moved an inch or two to the right: success! huzzah! Happy dance!

The listing for Arrow gives plenty of info that I didn’t include here – I mostly wanted to help any who may yet want to know what makes it so gosh-darned awesometastic. The fact that the designer said that “most human beings cannot solve the puzzle without the aid of a computer” has absolutely nothing to do with my wanting to share – my ego obviously has no need for such fluffery! Now then: Please click like and subscribe and share and leave (positive) comments below and tell my Kindergarten Vice Principal she didn’t know what the hell she was talking about!

The first impression I have of Juno’s second sequential discovery puzzle is that it is no small affair: it feels solid and significant in my hands, larger and heavier than most quality wood puzzles. Its wheels move, and separate pieces are readily apparent, distinct from the carved doors on its sides. It is clear that the goal will be to remove the front, rear, and top of the car, in order to gain access to the concealed compartment(s).

Unlike many themed puzzles, Slammed Car is unique in that the theme is maintained as one progresses: the tools discovered are clearly intended to encourage the feeling that one is opening and disassembling a car. This playful take on the puzzle box does not mean that the steps are simple, however; while the initial steps may be somewhat apparent upon initial inspection, the difficulty quickly ramps up, leaving you with several tools with no clear purpose. Personally, I enjoy the ability to quickly become immersed in a puzzle, only to find myself suddenly adrift, with only a hazy view of the opposite shore.

As I write this, I have still not reached my destination: I have tools and direction, with some of the mechanics worked out after having been granted a view of some further inner workings and thereby developing a notion of how to proceed. I anticipate larger “a-ha” moments when I return to experiment and explore further, likely following extended bouts of confusion and delighted frustration.

Slammed Car has already introduced some unique mechanisms, presented in a thematic approach that feels more practical than some of the more whimsical Karakuri pieces. The woods are lightly aromatic and exceedingly smooth, their hues contrasting nicely with one another, encouraging the feeling of heading to the beach in the iconic, California Woodie of the early 20th Century. Although I have yet to fully solve this puzzle, I can confidently say that it is a trip worth taking, whether or not I may wipeout along the way – that is, after all, part of the fun.

Grade: Four and a Half Sinatras