Skip to content
Menu Home Another Day, Not Just Another Drawer
Close 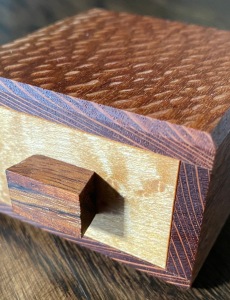 A few weeks ago, I reached out to a fellow puzzler on the social media site that shall not be named who, so I had heard, might be looking to let go of a few puzzles from his rather immense collection. After a bit of back and forth in which I listed out a number of names of makers and designers whose works are generally a bit difficult to find, he let me know that he did indeed have a couple boxes by none other than Kathleen Malcolmson. I have admired her boxes from afar but never before had the chance to get one (at least not for anything resembling a reasonable price). Not only was this a box made by her, but it was designed in collaboration with another hard-to-obtain designer, Perry McDaniel. The story goes that she had been working on the design for some years, unable to get it just right until Perry chimed in with a needed final touch that would allow her to produce it as envisioned.

Unlocked Drawer is a relatively small box, consisting of just a drawer in a frame. It is beautifully made of contrasting lacewood and primavera, an aesthetic that is pretty consistent across her creations, at least as far as I can tell. Upon receiving it, I quickly found that its secrets were well-hidden: other than a bit of noise to be heard when shaken (presumably the Texas quarter to be found inside), the seams visible from the front do not permit any movement and no other breaks could be seen.

And that’s it! Fabulously frustrating in its simplicity and elegance, it would take me quite a bit of poking prodding pushing and pulling over the course of several days before a genuine aha that startled me with its sudden appearance. I love a moment like this: it is the reason many of us puzzle and we spend quite a bit of time chasing the feeling which is well represented in this little box. Closing it, there remains no indication of the solution, which I of course had to repeat several times since solving solely to revel in its gracefully hidden presence. A close relative of the box (Three-Layered Dovetail) was recently available at a Haubrich Auction, and was claimed by a puzzling French friend of mine, with whom I would not wish to engage in a bidding war – hopefully, I will be able to find a copy of my own, and/or any other Malcolmson boxes (particularly perhaps its predecessor, Locked Drawer, designed by Robert Sandfield). It more than lived up to the hype in its beauty, craftsmanship, and deviousness.